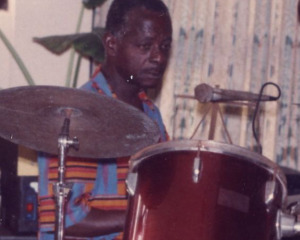 At the time I was a member of the jazz trio called "No Dogs Allowed". Fianko Yirenchi who's mother was Ghanaian and father was Nigerian was the band leader. He was born and raised in Nigeria so when I met him, he was new to Ghana as I was.

I was the lead vocalist and would go back and forth between playing rhythm guitar and bass guitar whichever suited our needs for the song. Just before we got the contract as the house musicians for Busua Beach Resort, our African drummer named Tommy from Cape Coast, died suddenly of cholera. We were in a dilemma. We were able to get a young guy just a couple of years out of high school to drum with us but he needed a lot of training, but wasn't interested in learning to become a skilled African drummer. He was only committed to being with us temporarily.

We had no idea how we would find a jazz drummer in Ghana where there were very few jazz drummers and even fewer African drummers who were interested in learning jazz music. What to do. The answer came unexpectedly.

One day one of the hotel employees asked Fianko our band leader if he could help him with some music lessons. This employee played piano for the church band down the street. Fianko agreed and set a time to meet him at the church. When we arrived the practice session started and the African drummer Napoleon was there playing along. Immediately as we saw him play we knew he was the drummer for us. We could hardly wait to approach him, and of course he was glad to be a part of our group. Problem solved.

Let me tell you a little about Napoleon. He was a well seasoned jazz drummer that could play any kind of music. Fianko used to continually remind our young temporary drummer that he was not playing drums, he was to play music with the drums. This is exactly what Napoleon did. He played music with his drums. He was definitely a trained professional.

"No Dogs Allowed" Featuring Fianko Yirenchi--Before Napoleon and I Joined

As time went on I learned more about him. He started playing percussion at the age of 4 or 5 yeas old. He was a professional conga player and a master African drummer as well as an accomplished jazz drummer. He did not start playing a trap drum set, till about 20 or 30 years later.

At the age of 7 or 8 or years of age he was chosen by Dr Kwame Nkruma (the first president of Ghana) to be part of his entourage of musicians when he went to visit King Haile Selassie of Ethiopia. This young child was playing percussion with seasoned adult musicians.

When I learned of this I was fascinated. Someone who really met Asagefo Dr Kwame Nkruma and Haile Selassie. WOW!! I had this burning question I wanted to ask him. I had heard that King Haile Selassie had real live lions around his throne. I had also heard that His Majesty Halie Selassie also traced his lineage all the way back to King Menelek who was the son of King Solomon and Queen Makeda (Queen of Sheba) of the bible. I asked him was it true.

He said yes to both questions.

He told me when they came to visit the King they had to go through this court yard before you reached His Majesty's throne. In this court yard huge live healthy lions. He said if you came through there and you did not have the right intentions those lions would attack. His Majesty had full command over the lions.

Napoleon proceeded to tell me that in the throne room were pictures of his lineage on the wall dating back to King Solomon and Queen Makeda. Napoleon was a short little man standing about 5'2" or 5'3" tall, and even shorter when he was a little boy. He said that when he played the congas with the grown men in the band he had to stand on a small platform to be able to reach the congas. His majesty was so impressed with his skill that he personally called him out of all the musicians to give him an envelope with a monetary reward. This was a memorable experience for Napoleon.

I had the privilege of playing and learning from this excellent African drummer. Unfortunately I learned that he passed away about a year after I left the band. I'll always remember you Napoleon and I cherish the time I spent with you. May your soul rest in perfect Peace.