AKWAABA (Welcome), you are invited to explore the inspirational songs from Album 2. You can click on the link right below to purchase any song you hear on this page that you like, and preview other songs not included on this page. You can also read the story behind the album further down the page. We hope you enjoy your visit--If you do tell us about it in the comment section at the bottom of this page, and feel free to share it with others.

"I Am Your Source of Hope" written by Ahveekhy Ben BinahYah

The Story Behind The Album: Let's Rise Again-"ABABIO"

"Let's Rise Again-ABABIO" performance series was produced to share some of my observations and thoughts (as an African American) on my 10 years experience of living in Ghana West Africa.

The performance series was largely funded by MCAI The Multicultural Arts Initiative based in Pittsburgh. We also received wonderful support from BDPA-PGH, Jamil's Global Village, Soul Pitt and Afrika Yetu. We thank you for your wonderful support.

This musical performance series featured some of my original songs written while in Ghana along with cover songs by other African/African American and Carribean artists. The genres of music included Jazz, R&B,Reggae,African and what would be considered gospel. 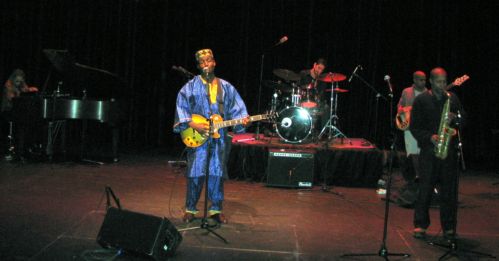 I had a wonderful set of accomplished Pittsburgh, PA musicians that were committed to the success of this performance series, and who I want to express appreciation to for their part in making this performance series a success: Tony Campbell on saxophone, Donna Davis on keyboards, Eli Kihonia on percussion, Paco Mahone on Bass and Jay Constable on drums. This album is the live recording of the performance at The Kelly Strayhorne Theater in East Liberty, Pittsburgh, Pa.

Thanks to Yahweh My Heavenly Father, who brought together all who contributed to the success of this production of inspirational songs. HALLELUYAHWEH!!!

For More Stories About My Stay In Africa

See The Links Below

From Inspirational Stories to HOME